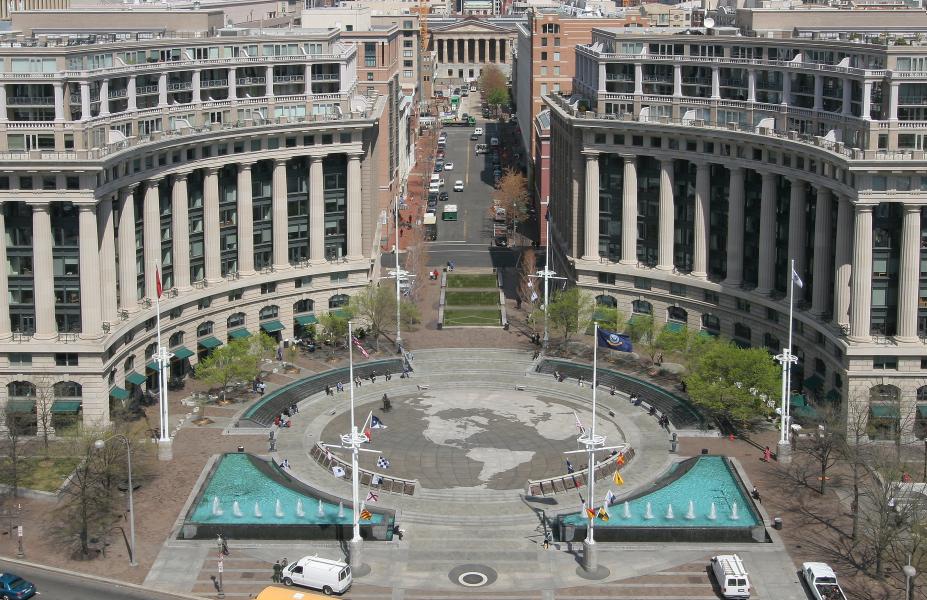 Washington, DC – The DC Office of Cable Television, Film, Music & Entertainment is pleased to honor the Navy Memorial and Naval Heritage Center in Washington, DC as the December 2015 Location of the Month.

The Navy Memorial and Naval Heritage Center, located in Washington, DC’s Penn Quarter, honors and commemorates the sailors of the United States Navy. The memorial is a circular outdoor public plaza that features a “Granite Sea” map of the world, surrounded by fountains, pools, flagpole masts, and sculpted panels depicting historic achievements of the United States Navy.

Also located at the site is the Naval Heritage Center, which serves as a place to learn about the history and heritage of the men and women of the sea services. The Gallery Deck, or main space, of the Naval Heritage Center features a full view of the exhibition area and the Commemorative Plaque Wall. The main space can accommodate up to 225 standing guests for a reception style event while the President Room is ideal for meetings or dinners of up to 75 people standing. If additional room is needed the Gallery Deck and Presidents room can be combined to accommodate as many as 420 guests.

In 2011, DC’s film commission, which is now apart of the DC Office of Cable Television, Film, Music & Entertainment, launched the Location of the Month to bring attention to the wide range of cinematically compelling locations that are available to film and television productions. Former Location of the Month recipients include the Angelika Pop-Up at Union Market in Northeast, the National Museum of the US Navy in Southeast, and the Mansion on O Street in Northwest.

The District of Columbia Office of Cable Television, Film, Music & Entertainment (OCTFME) is responsible for implementing, managing, and administering programs, initiatives, and services that support media industry economic activity, growth and employment in the District of Columbia. Washington, DC’s instantly recognizable landmarks, diverse neighborhoods, cultural amenities, and first-class accommodations are just some of the many features that make the nation’s capital a venue of choice for media production. For more information, contact the Office of Cable Television, Film, Music & Entertainment at (202) 727-6608, visit us on the web at http://film.dc.gov, join the DC Film community on http://www.facebook.com/EntertainDC, or follow us on http://twitter.com/Entertain_DC.