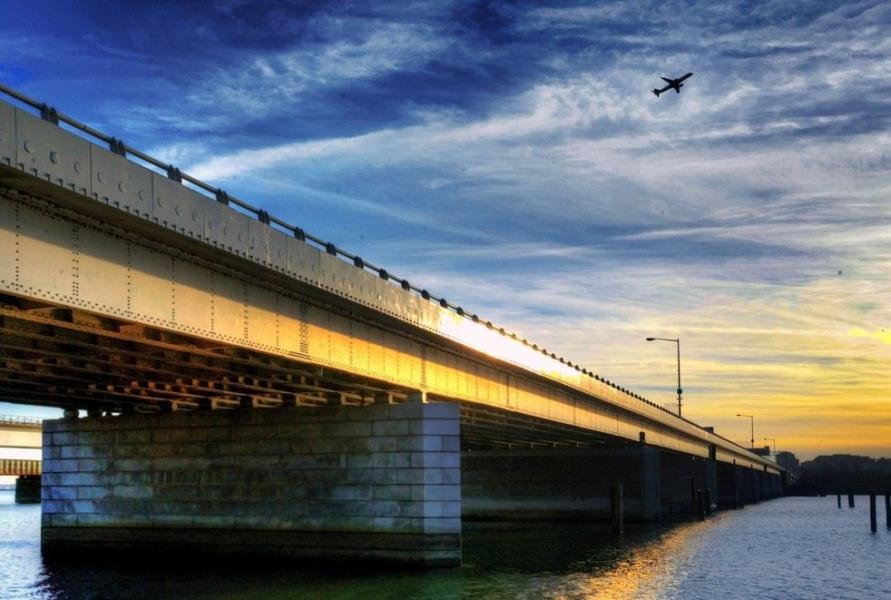 Washington, DC – The DC Office of Cable Television, Film, Music & Entertainment is pleased to honor the 11 Street Bridges in Washington, DC as the November 2015 Location of the Month.

The 11th Street Bridges are a trio of one-way bridges across the Anacostia River that provide a scenic platform for filming views of Washington’s skyline and action along the highway and river.

The southbound structure is officially named the Officer Kevin J. Welsh Memorial Bridge, while the northbound structure is officially named the 11th Street Bridge. The bridges convey Interstate 295 across the Anacostia to its northern terminus at Interstate 695. The bridges also connect the neighborhood of Anacostia with the rest of the city of Washington.

The 11th Street Bridges have a long history in Washington, DC.  The first bridge was constructed about 1800 and played a role in the War of 1812 where it was burned but later repaired. The second bridge was constructed in 1873 but was later replaced with two four-lane bridges in 1965 and 1970. The bridge complex has been modernized multiple times since then.

In 2011, DC’s film commission, which is now apart of the DC Office of Cable Television, Film, Music & Entertainment, launched the Location of the Month to bring attention to the wide range of cinematically compelling locations that are available to film and television productions. Former Location of the Month recipients include the Angelika Pop-Up at Union Market in Northeast, the National Museum of the U.S. Navy in Southeast, and the Mansion on O St in Northwest.

To learn more about the 11st Street Bridges and to view photos, please visit the Location of the Month feature on our website. If you are interested in using the 11th Street Bridges as a filming location, please contact us at [email protected].