The Blind Whino Receives October Location of the Month Distinction 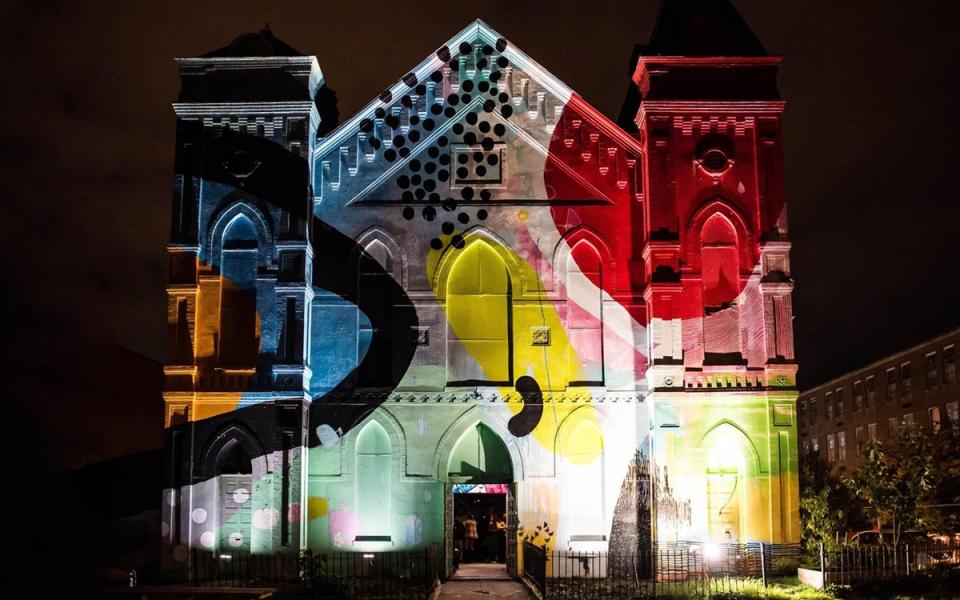 Washington, DC – The DC Office of Cable Television, Film, Music & Entertainment is pleased to honor Blind Whino in Northwest Washington as the  October 2015 Location of the Month.

Blind Whino is a majestic 18,000 square-foot converted church that operates as one of Washington, DC’s most funky art and event spaces.

The structure of the venue was designed and built in the early 1900s by James A. Boyce at the site of the old Friendship Baptist Church; it was designated as a DC historic site in 2004. The building is unique for its eclectic use of Victorian and Romanesque architectural styles combined with Gothic Revival and Queen Anne elements. For over 20 years, after the congregation found a new home one block over, the venue remained vacant.

It is located in the Southwest corridor of Washington, DC and was birthed from creators Shane Pomajambo of Art Whino and Ian Callender of Suite Nation. The organization was founded on the principal that art is a catalyst for change in a community. It produces free community arts programs and special events including exhibits, events, live performances and artist workshops year round.

The partners wanted to bring some cultural enhancements to the Southwest Corridor by integrating a few large-scale art installations and community events to the building. Art Whino commissioned Atlanta based artist HENSE to produce a full building mural wrap around the entire perimeter of the venue and the end result is truly a one of a kind visual. Additionally, a full mural, curated by Australian based artist MEGGS, wraps on the inside performance area. Further interior renovations gave way for the building to become Blind Whino’s headquarters and a new community arts club and event space for Washington, DC.

In 2011, DC’s film commission, which is now apart of the DC Office of Cable Television, Film, Music & Entertainment, launched the Location of the Month to bring attention to the wide range of cinematically compelling locations that are available to film and television productions. Former Location of the Month recipients include the Angelika Pop-Up at Union Market in Northeast, the National Museum of the US Navy in Southeast, and the Mansion on O St in Northwest.

To learn more about the Blind Whino and to view photos, please visit the Location of the Month feature on our website. If you are interested in using the Blind Whino as a filming location, please contact us at [email protected].