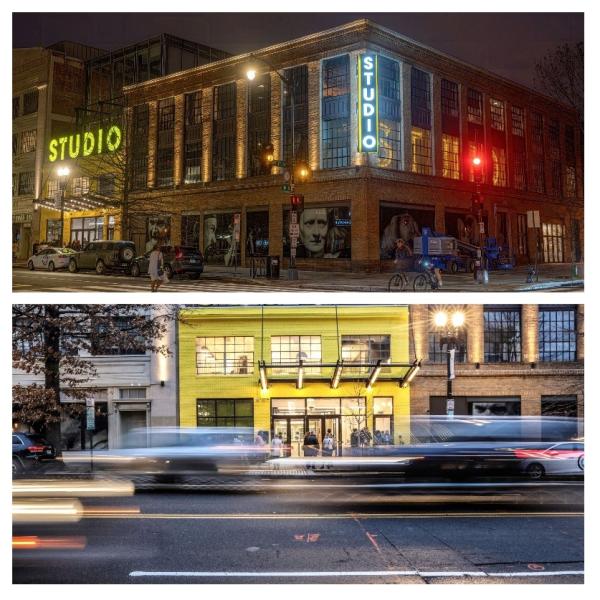 Washington, DC – The Office of Cable Television, Film, Music, and Entertainment (OCTFME) recognizes Studio Theatre as the May 2022 Location of the Month.

Studio Theatre was founded in 1978 by titan of DC theatre, Joy Zinoman. The non-profit, located in the 14th Street corridor of Washington, DC, launched its pilot season in a theater on Rhode Island Avenue, spent eight years in a rented space on Church Street, opened a theater on the corner of 14th and P Streets in 1987, and gradually expanded that footprint to include the current four theatres it owns and operates.

Over four decades, Studio Theatre has expanded its operations while maintaining the signature intimacy of its theatres. Deeply committed to a powerful exchange between actor and audience member throughout that history, none of its theatres has ever seated more than 225 patrons. The multi-venue complex stretches half a city block but has managed to stay committed to its core distinguishing characteristics: deliberately intimate spaces; excellence in acting and design; and seasons that feature many of the most significant playwrights of our time.

Studio Theatre produces plays that start conversations and forge connections. Whether it’s through the work on their stages, engaging with the community, hosting high school students for free performances, or training the next generation of arts professionals, Studio Theatre strives to be an artistic home for all and a cultural hub. Each season it holds over 300 performances, reaching over 65,000 people. The productions offer a new and contemporary repertoire, including plays that benefit from particularly intimate immersive staging. The quality of this work has been recognized over its 40+ year history by sustained community support and more than 70 Helen Hayes Awards for excellence in professional theatre. It is “where local audiences will find today’s edgiest playwrights” (Variety).

"We are so pleased that the Office of Cable Television, Film, Music and Entertainment is spotlighting our distinctive building on DC's busiest nightlife and entertainment corridor," said Rebecca Ende Lichtenberg, Executive Director of Studio Theatre.

Studio Theatre is emerging with a brand new and energetic presence after a $20 million renovation that beautifully marries the building’s industrial origins with bold stylistic choices that identify it as the local landmark for contemporary theatre that it is today. Studio Theatre’s extensive renovations delivered its most versatile and technologically advanced theatre space, creating a more welcoming presence on the 14th Street corridor.

Studio Theatre offers a distinctive media production location option for narrative and non-fiction producers looking to capture a unique slice of the District’s diverse landscape and historic architecture. Located in the heart of vibrant Logan Circle, Studio Theatre also offers exceptional spaces for events with a variety of modern and unique space options ranging in size and capacity. Whether it’s one of their four intimate theatres, our engaging gathering areas, or the third-floor rehearsal rooms that overlook the bustling 14th Street Corridor, Studio has the right space for any type of production or affair.

To learn more about Studio Theatre and to inquire about its availability for events, tours, and as an exceptional filming location, go to www.studiotheatre.org. For information about past locations of the month, visit DC Reel-Scout Directory.