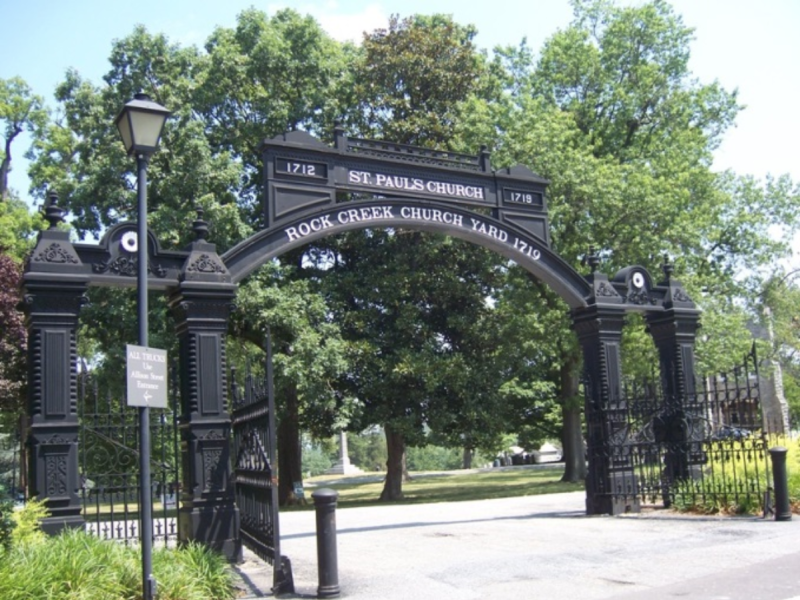 Washington, DC—The Office of Cable Television, Film, Music and Entertainment (OCTFME) recognizes St. Paul’s Rock Creek Cemetery as the October 2018 Location of the Month, a fitting choice for the month of Halloween!

St. Paul’s Rock Creek Cemetery is a gem of hidden tranquility in the midst of an urban setting. Lush landscape, breathtaking sculptures and notable history combined makes Rock Creek Cemetery the most beautiful and evocative public cemetery in the nation’s capital. Located at Rock Creek Church Road, NW, and Webster Street, NW, in the Petworth neighborhood of Washington, DC, it is the city’s oldest cemetery.

Dating from 1719, the Cemetery was designed as part of the rural cemetery movement first advocated by the architect Sir Christopher Wren in 1711. The burial ground in the churchyard’s urban space, with its natural 86-acre rolling landscape, functions as both cemetery and public park.

The beautiful landscape, the Cemetery’s famous residents, and   the stunning variety of sculptures and monuments make Rock Creek Cemetery a place of pilgrimage for people of all faiths and an excellent setting for film, television and event productions.

Rock Creek Cemetery serves as the final resting place to some of Washington’s most notable residents including (in alphabetical order):

On August 12, 1977, Rock Creek Cemetery and the adjacent church grounds were listed on the National Register of Historic Places as Rock Creek Church Yard and Cemetery. Rock Creek Cemetery’s park-like setting is graced with beautiful sculptures, mausoleums, monuments, and markers, many of which are the works of famous artisans and landscape architects. The best known is the Adams Memorial, a contemplative, androgynous bronze sculpture seated before a block of granite that was created by Augustus Saint-Gaudens and Stanford White. It marks the graves of Marian Hooper ‘Clover’ Adams and her husband, Henry Adams.

Numerous works of art are located in the Cemetery including:

“I am thrilled and truly grateful that St. Paul’s Rock Creek Cemetery has been selected as the featured location for October by The DC Office of Cable Television, Film, Music and Entertainment (OCTFME). It gives us an opportunity to showcase the resources that many do not even know exists here in DC,” said Kaye Savage, Director of Cemetery Development at the Cemetery, and a DC native. “St. Paul’s Rock Creek Cemetery is a place for all people, Christians, Jews, Muslims, all faiths and nationalities. We are open and inclusive and offer a celebration of life for all of DC.”