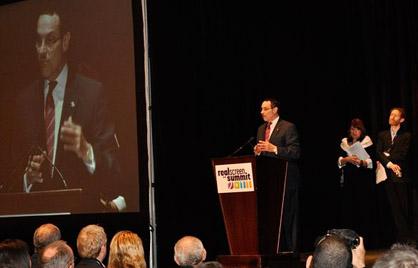 Realscreen is the most important non-fiction film and television industry event.

On February 1, 2011 Mayor Vincent C. Gray kicked off the 13th annual Realscreen Summit at the Renaissance Hotel in Washington, DC. Realscreen is the most important non-fiction film and television industry event dedicated to the development of business and creative opportunities for those in non-fiction and factual programming and content creation. Mayor Gray welcomed over 1,500 professionals from the international film and television community to the District. He encouraged the summit participants to explore the city's bustling neighborhoods that have served as the backdrop for several premiere feature films. Washington, DC, as Mayor Gray described, “is an attractive place for productions and has a major talent pool of creative local residents that are committed to producing great work.”

As DC has most notably been referred to as “Documentary Central” by the Los Angeles Times and “Docuwood” by the Hollywood Reporter, Mayor Gray suggested to the film audience a possible subject for a documentary, “Taxation Without Representation.” This documentary, “could tell the story of the 600,000 residents living in the capitol of democracy, that pay more than $3.6 billion dollars in federal taxes, without representation in Congress.” Mayor Gray noted the importance of telling such a story as it would be a factual interpretation of the injustices our residents face. In his remarks, Mayor Gray highlighted the achievements of the Office of Motion Picture and Television Development, and thanked the office for its steadfast work and commitment to bringing film and television projects to the District. “This office serves as the liaison between the industry and the government, and opens doors so that productions can run smoothly.” Mayor Gray expressed his and the city’s understanding of the value the industry brings to the District and the significant contributions made to our local economy. This year’s summit reached the highest number of participants it had ever seen over its thirteen year history and pumped approximately $2.37 million into the local economy during the course of the conference.

More information about the Realscreen Summit can be found on its website.