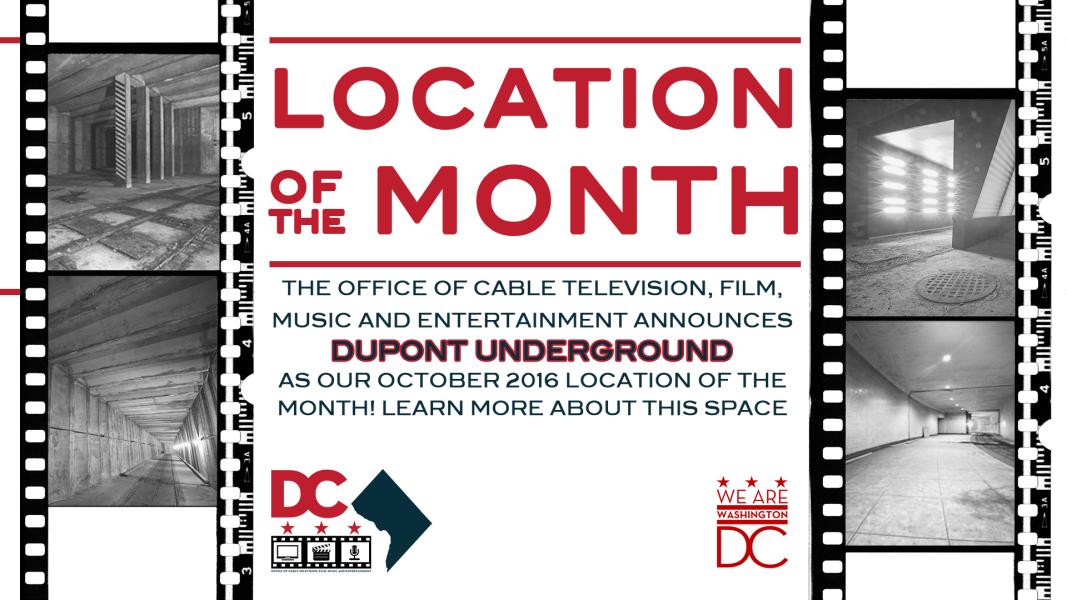 Washington, DC –  The DC Office of Cable Television, Film, Music and Entertainment recognizes the Dupont Underground as the October 2016 Location of the Month.
Dupont Underground, located in Washington’s northwest quadrant at the intersection of Connecticut and Massachusetts Avenue NW, was once a forgotten space beneath the District’s iconic Dupont Circle. Now the abandoned trolley station, that was part of the nations capital’s original design by Pierre L’Enfant, is a cultural and filming destination. There are multiple entrances closed to the public and the “New Hampshire Ave Entrance" located in front of 11 Dupont Circle NW has public access.

Opened in 1949 as a trolley station, the 75,000 square feet of underground platforms and tunnels were closed off in 1962, when the city’s streetcar system shut down. Other than being designated as a fallout shelter in the late 1960s and hosting a short-lived food court on the west platform in the mid-1990s, the space has remained empty until now. In late 2014, the Dupont Underground began activating the space in many ways including but not limited to: film and commercial photography, art & design exhibitions, public arts performances, community events, creative economy incubators and for demonstrations of emerging technologies. As a unique, centrally located venue, Dupont Underground is great for films in the horror or sci-fi thriller genre as well as documentaries and video game imaging.

There have been numerous film productions in the space and notable broadcasters like Discovery Communications and ESPN are just a sample of the organizations that have utilized this one-of-a-kind space. Dupont Underground also hosts a live music session series called “Dupont Underground Sessions” which invites artists to come perform in the tunnels or in the lit installation, called “iGlow” which is located at the end of the tunnel. An on-site facility manager is available to answer any questions about the space, its features and any usage restrictions. To learn more about Dupont Underground and to view photos, please visit the Location of the Month feature on the OCTFME website. If you are interested in using Dupont Underground as a filming location, please contact us at [email protected] ### The “Location of the