Tuesday, May 8, 2018
A 57-year-old venue that features 45,423 in event seating capacity and over 8,000 parking spaces that can be used for special events, festivals, and staged commercial filming. 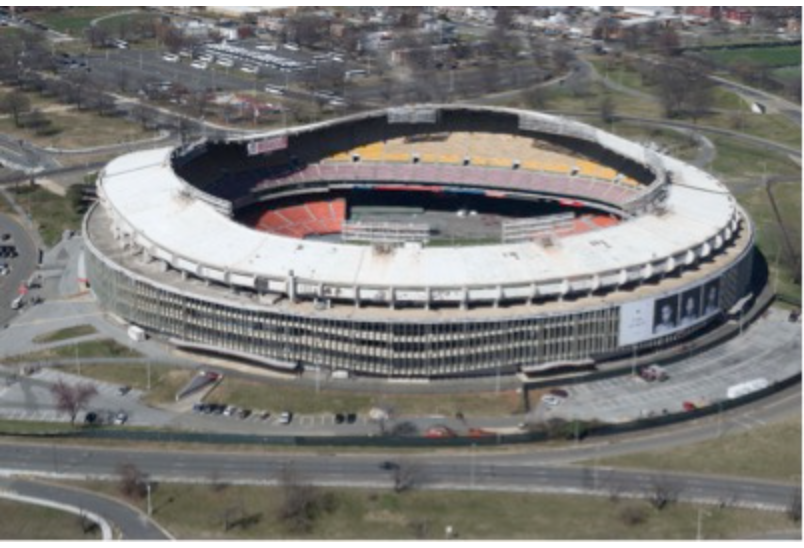 The Office of Cable Television, Film, Music and Entertainment (OCTFME) recognizes the Robert F. Memorial Stadium (RFK Stadium) as the May 2018 Location of the Month. RFK Stadium is located at 2400 East Capitol Street SE, Washington, DC 20003, in Ward 6.

Events DC, the official convention and sports authority for the District of Columbia, manages the operations of RFK Stadium, a 57-year-old venue that features 45,423 in event seating capacity and over 8,000 parking spaces that can be used for special events, festivals, and staged commercial filming. Originally known as the “District of Columbia Stadium (D.C. Stadium),” the campus was renamed Robert F. Kennedy Memorial Stadium in January 1969 to honor the U.S. Senator and presidential candidate assassinated the previous June.  Over the years, RFK Stadium has been home to numerous professional D.C. sports teams such as the Washington Redskins, Washington Nationals, and the Washington Senators. The stadium has also hosted more than 30 combined Women’s and Men’s U.S. Soccer matches, the most of any facility in the country.

RFK Stadium is no stranger to film projects, and in recent years networks like NFL Films, A & E Television, Viva Creative, Thomson Reuters, Stone Soup and Rezolution Entertainment have shot documentaries, videos and more at the site.

“From hosting performances by The Beatles and Michael Jackson to having served as the home for DC’s professional football, soccer and baseball teams, RFK Stadium is a pillar of sports and entertainment in our nation’s capital, shaping unforgettable experiences for generations of the city’s residents and visitors,” said Gregory A. O’Dell, president and CEO at Events DC.

Events DC, is currently in the process of implementing series of short-term redevelopment projects on the campus that will make the footprint in and around RFK Stadium even more dynamic and appealing as a media production backdrop. The redevelopment plan will transform the RFK Stadium-Armory Campus into a recreation destination for filming, entertainment, music, sports and the community.

The redevelopment will include three multi-purpose recreational and community playing fields, a Market Hall for concessions, three pedestrian bridges connecting the site to Kingman and Heritage Islands which improves the pedestrian flow and access, 8 parking lots, and finally a Memorial honoring the late Senator, Robert F. Kennedy.  This new development is expected to generate $4.5 million in annual tax revenue and hundreds of new jobs as well as is an ideal location for filmmakers to create history.

“Events DC is honored to have the campus featured as the Location of the Month by the Office of Cable Television, Film, Music and Entertainment,” continued O’Dell. “As we continue to host and produce exciting events at RFK Stadium, such as the Wales vs. South Africa international rugby match in June, and implement our short-term redevelopment project for the Campus, we will continue to welcome new and returning film projects as well.”

RFK Stadium is easily accessible by Metrorail (blue and orange lines), Metrobus and two major highways surrounding the city. Ample on-site parking in secured lots is available for all events.

RFK Stadium and its surround festival grounds offer an excellent opportunity for commercial photography and filming. If you are interested in learning more about RFK Stadium Campus, please contact Chala Jones at [email protected] or 202-608-1134. You can also find more information about its history at www.eventsdc.com and its campus redevelopment at www.rfkcampus.com.

***The “Location of the Month” initiative is part of the agency’s mission to market and support District locales as media production locations, and to bring attention to the wide range of cinematically compelling locations that are available to film and television productions.

RFK Stadium - May 2018 Location of the Month