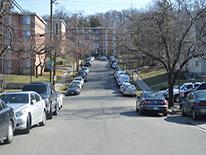 The DC Office of Cable Television, Film, Music & Entertainment is pleased to honor the Benning Neighborhood in Washington, DC as the March 2016 Location of the Month.

Benning Road is a major thoroughfare that connects Northeast Washington DC to Prince George’s County, Maryland but the neighborhood that surrounds the street is the real jewel.

In the late 18th century, "Captain" William Benning came from Virginia and purchased 330 acres around the area where the neighborhood now exists. The Benning Bridge was built as a toll bridge in the 1830s and it became one of the earliest crossings over the Anacostia River and an important entry point into the District. "Benning's Road" appears on maps as far back as 1861.

This neighborhood is perfect for productions that require a working class residential backdrop.

See the press release below for more information. If you are interested in using Benning Neighborhood as a filming location, please contact us at [email protected]