Thursday, July 27, 2017
A familiar DC hotel has a few surprises for filmmakers 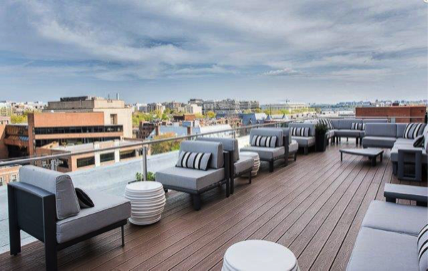 The Office of Cable Television, Film, Music and Entertainment (OCTFME)
is pleased to recognize The Graham’s Rooftop and The Alex Craft Cocktail Cellar as the July
2017 Location of the Month.

Named after the famed scientist and inventor Alexander Graham Bell, the 7-story boutique hotel is located in historic Georgetown (Ward 2) on tree-lined Thomas Jefferson Street, NW. The property boasts 57 guest rooms, a business center, and most importantly for production crews, the spacious Rooftop, and a quiet underground Alex Cellar.

“Both spots are great cinematic venues,” suggested DC-resident Lauren Sutton, The Graham’s Director of Food & Beverage. “I can see a scene in which friends are out for a fun night on The Rooftop or a romantic, candle-lit wedding proposal in The Alex.”

The real gift of The Rooftop is the view: to the West, unparalleled sunsets over Georgetown University and Key Bridge; South, Rosslyn's evolving skyline; North, historic Georgetown; and East, Memorial Bridge, Watergate, Kennedy Center, and a looming Washington Monument. Measuring 2,100 square feet with an abundance of sofa sections and equipped with a full-service bar, The Rooftop can accommodate a production with up to 150 cast and crew.

Another space at The Graham great for filming is The Alex Craft Cocktail Cellar. Located in the hotel’s basement, The Alex has a unique look and feel, featuring a velvet curtain-lined entry way, leading into a dimly-lit ‘speakeasy,’ complete with a small cocktail bar, giant Empire sofas, chairs, tables for dining, exposed ceiling pipes and a small stage. The Alex can accommodate up to 60 cast and crew in the 700 square foot space.

“The Alex Cellar was an inspiration of the Prohibition Era. There’s a cool steampunk thing going on with the interiors,” said Mark Namdar, The Graham Hotel’s General Manager. For more information about The Graham and to arrange a potential film shoot there, please go to their website: https://www.thegrahamgeorgetown.com/

The Office of Cable Television, Film, Music and Entertainment’s Location of the Month initiative is part of the agency’s mission to market and support District locales as media production locations, and to bring attention to the wide range of cinematically compelling locations that are available to film and television productions.