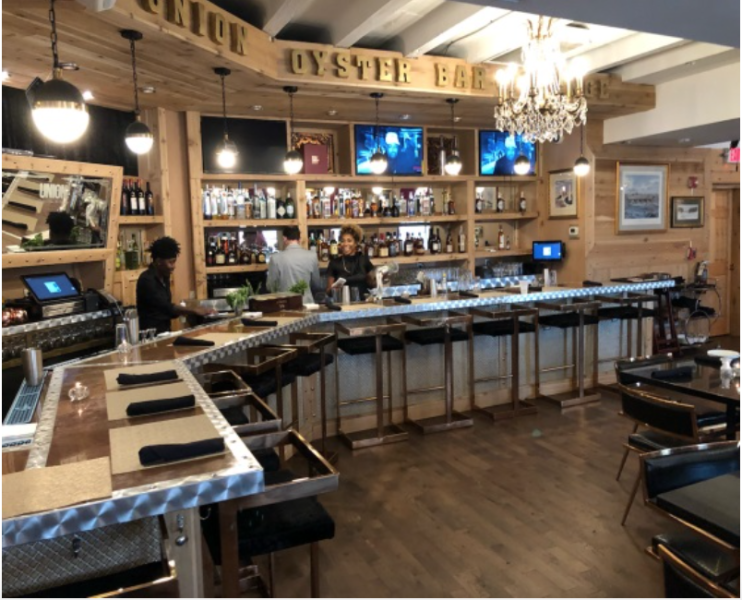 The Office of Cable Television, Film, Music and Entertainment (OCTFME) recognizes the Union District Oyster Bar & Lounge as the January 2019 Location of the Month.

Union District Oyster Bar & Lounge has exploded on to the DC Restaurant scene bringing sophisticated cuisine and live entertainment in an upscale supper club type environment to the Union Market area of Northeast DC.  Located in Ward 5, at 501 Morse St. NE, in the historic Farmers Market section of the city now known as Union Market, Union District opened its doors in October 2018, and is the creation of owners Russell Webster (a Washington, DC native, music and entertainment impresario and real estate investor) and his business partner, Sean Rao (real estate investor).

The 4,000 square foot restaurant and raw oyster bar, has a mixture of modern and vintage décor with chandeliers, brushed metal bar tops, a communal dining area and extensive bar on the lower level and a relaxing lounge environment, with DJ booth, full bar with seating and fully contained performance stage on the second level.  The melting pot of ethnic backgrounds and nationalities, and the Union Market area location -- one of DC’s hottest; make Union District a fantastic location for film and television productions. In addition to the dining experience, the second floor stage is ready and able to showcase a variety of live performances and events.  There is a local house band that performs several nights a week to entertain guests.  The food offerings and beverage program provide catering options as well.

“Developing our brand and creating the unique character of Union District Oyster Bar & Lounge was very simple: Create a hip, sexy, high-end restaurant lounge space curating amazing food and beverage experiences with an eclectic mix of entertainment.  EVERYTHING HAPPENS AT UNION,” stated proprietor Webster.  He added, “It is not by happenstance that our creative conception is named UNION. My vision was to converge the old with the new, embracing my love of classic Washington, DC, while simultaneously ushering in the postmodern mounting communities.  We are humbled that the Office of Cable Television, Film, Music and Entertainment (OCTFME) chose Union District Oyster Bar & Lounge to lead into 2019 as the featured location of the month for January, and look forward to a longstanding partnership.”

OCTFME is developing a full episode on the restaurant for “202 Extra” an extended version of its Emmy winning “The 202,” focused on their food, location, décor and entertainment.  Also, six episodes of its music performance program “The Sound,” which showcases and gives local artists a platform to showcase their talent and creativity, were filmed on the stage at the venue.