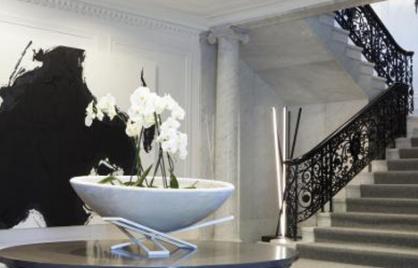 The Office of Cable Television, Film, Music and Entertainment (OCTFME) recognizes Ampeer Residences as the January 2018 Location of the Month. Built in 1903 by world-famous architect Stanford White and located just steps from the Dupont Circle Metro Station at 15 Dupont Circle, NW, in Ward 2, Ampeer combines the elegance of Neoclassicism, decorative Italianate design, and modern interior spaces and décor. Ampeer Residences boasts 36,479 square feet of space, and is an ideal location for film productions seeking a hip, modern urban living backdrop for a film or television project; provide an extended stay lodging option for visiting cast and crew, or serve as a temporary production office space site.

The four-story mansion was originally constructed as a ‘summer house’ for moguls Robert and Elinor Medill Patterson, owners of the Chicago Tribune. Patterson’s daughter, socialite Cissy Patterson, subsequently entertained in grand fashion, even hosting President Calvin Coolidge as a guest while the White House was under renovation. In 1951, the mansion was purchased by the Washington Club, a private women’s social organization; and in 2014, Saul Urban real estate and development company purchased, reconceived and redesigned the property.

“[The Ampeer Residences] is just so versatile for movies, television, and fashion shoots,” says Tracy Kaltman-Ahmed, spokesperson for the Ampeer Residences. “The living room can be staged for a black-tie party with a string quartet on the balcony, the library would be great for interviews, the kitchen is ideal for a cooking show, and the balcony overlooking the Circle is great for a spy film.”

The Ampeer’s 20 elegantly appointed rooms in the mansion portion of the complex and the accommodations located in the 70-unit tower can be utilized for a short-term stay by production crews during a film shoot. The condominiums range in size from studios to courtyard units, to lofts, and one-bedroom suites. All of the units are outfitted with fully operable kitchens and completely furnished.