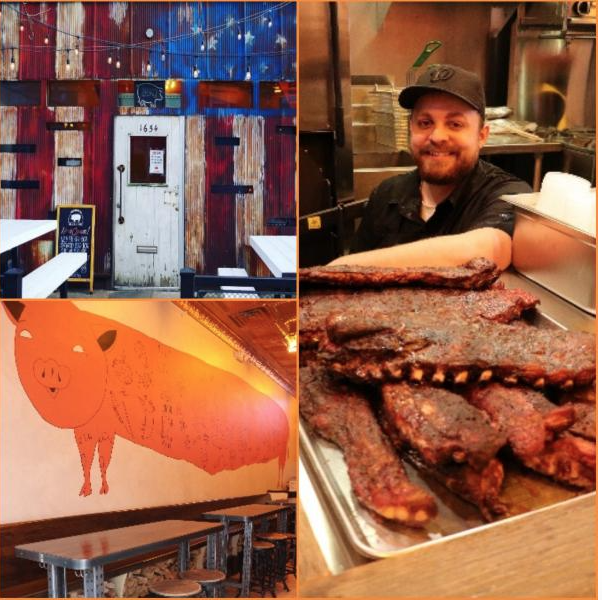 The Office of Cable Television, Film, Music and Entertainment (OCTFME) recognizes Federalist Pig as the February 2019 Location of the Month.

The food and theme of the Federalist Pig completely reinvented the menus and atmosphere of a Rob Sonderman owned restaurant. Sonderman, a DC native, known for his mouthwatering meats as former pitmaster at DCity Smokehouse, teamed up with former co-founder and chief executive of &PIZZA, Steve Salis, to open Federalist Pig in late 2016. The restaurant has a reputation for serving some of the finest barbecue in Washington, DC.

The high-top tables, and the church pew seating that runs the length of the restaurant can accommodate 30 diners. Federalist Pig has a rustic southern feel with an abundance of local touches. The door is from a former meat factory at Union Market, an American Flag adorns the storefront’s corrugated tin, and DC-based artist, Kelly Towles created the giant pig mural that spans the entire length of one wall.  Its location in the culturally diverse DC neighborhood of Adams Morgan adds to the ambience and makes a perfect backdrop to shoot films and television productions.

For catering, Federalist Pig’s top-tier barbecue allows diners to feast on eight different types of meats as well as vegetarian and vegan friendly options, all smoked for hours on end using up to six different hardwoods and several Sonderman created rubs and sauces. Voted DC’s best barbeque by Washingtonian Magazine in 2018, the blue ribbon barbeque is a welcome choice.

“As a DC native, I am honored to have Federalist Pig be recognized and nominated by my city as OCTFME's location of the month. We work hard every day to deliver the highest quality service and barbecue to the people of our community and beyond, so it’s great to see all of our team's hard work be noticed. We are thrilled to be in such great company and hope to establish Federalist Pig as a DC landmark for years to come. Thanks so much for including us,” said Rob Sonderman, Co-founder & Chef.

"We would like to thank the Office of Cable Television, Film, Music, & Entertainment for recognizing Federalist Pig as their Location of the Month. We know our popular BBQ joint will continue to grow fanatics across the country,” added Steve Salis, Co-Founder.

To learn more about the Federalist Pig, please visit www.federalistpig.com or OCTFME’s locations referral resource Federalist Pig. For information about past locations of the month, visit DC Reel-Scout Directory.