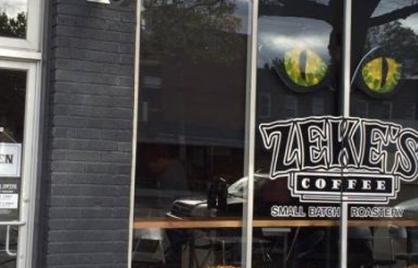 The Office of Cable Television, Film, Music and Entertainment (OCTFME) recognizes Zeke's Coffee DC as the February 2018 Location of the Month. Zeke’s is located at 2300 Rhode Island Avenue, NE, in Ward 5.

Located in the Woodridge neighborhood, east of Brookland, filmmakers can enjoy Zeke’s production elements: 16’ ceilings, over 1,400 square feet of space, and easy street access. The famed coffee-shop offers multiple options for location scouts: inside, an intimate seating area with tables and chairs as well as an open kitchen with on-site roaster; outside, productions can utilize patio seating looking onto Rhode Island Avenue.

Zeke’s was recently chosen as a location by award-winning novelist and television producer/writer/director George Pelecanos (The Wire, Treme, The Deuce) for the filming of his new independent crime feature film, DC Noir. DC Noir, a project that filmed 100% on location in the District, filmed at Zeke’s in November 2017.

“I loved having George [Pelecanos] and his production team at our place. They were great to work with -- just very professional and easy. We’re a coffee shop and roasting facility, but welcome other filmmakers to shoot at Zeke’s and in the neighborhood,” said John Kepner, Zeke’s owner. “I can see a few different scenes shot here -- like a couple’s lazy Saturday morning conversation or some dialogue between government operatives.”

Zeke’s Coffee DC began selling coffee in the Washington-metro area in 2008, and opened its DC roastery in November 2013, and has become a popular meeting place and signature local business in the Woodridge neighborhood of the District with a unique look, feel, and ambiance that will add character as a filming location.

“What’s cool about Woodridge is that it’s very traditional, neighborhood-y DC, not the typical hustle and bustle of downtown that tourists are used to,” added Kepner. “I also think it’s great that Washington, DC is becoming a great place to be featured in television and film. The city is so brilliantly diverse with different sections offering lots of angles for a director.”

Zeke’s Coffee offers an excellent opportunity for commercial photography and filming. If you are interested in learning more about Zeke’s Coffee DC, please contact John Kepner at [email protected]. You can also find more information about its history at Zeke's Coffee DC.