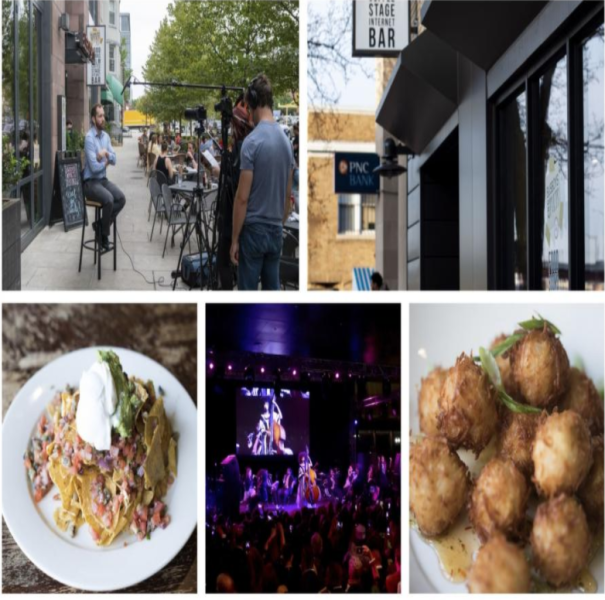 The Office of Cable Television, Film, Music and Entertainment (OCTFME) recognizes Busboys and Poets Anacostia as the December 2019 Location of the Month.

Busboys and Poets is a location of choice for many film crews and professional production companies looking for the perfect backdrop that is "so DC!"  From major networks such as MTV, CNN and ESPN to local documentarians and music video crews, Busboys and Poets welcome all creatives with a camera.  Busboys and Poets is fully equipped with beautiful art, large glass windows, a private room with a stage, professional stage lighting, and microphones.  After filming your masterpiece, consider doing a community screening on their big screen as a part of their Focus-in Film series!  Busboys and Poets also caters productions and events with a full service menu.

A community gathering place that was established in 2005, Busboys and Poets was founded by owner Andy Shallal, an artist, activist and restaurateur. After opening the flagship location at 14th and V Streets, NW, the neighboring residents and progressive community embraced Busboys. Busboys and Poets is now located in seven distinctive neighborhoods in the Washington Metropolitan area and is a cultural hub for artists, activists, writers, thinkers and dreamers.  Its newest location is Busboys and Poets Anacostia which is located in the historic Washington, DC neighborhood, on Martin Luther King Jr. Boulevard.

The name Busboys and Poets refers to American poet Langston Hughes, who worked as a busboy at the Wardman Park Hotel in the 1920s, prior to gaining recognition as a poet.

“We are honored to be the featured location of the month for December 2019, by the Office of Cable Television, Film, Music, and Entertainment,” stated owner and founder Andy Shallal.  “Busboys and Poets is a concept born in the District of Columbia where art, culture, and politics intentionally collide. We are thrilled to be recognized by such a great organization within our own city.”

Busboys and Poets is a community where racial and cultural connections are consciously uplifted... a place to take a deliberate pause and feed your mind, body and soul...a space for art, culture and politics to intentionally collide... we believe that by creating such a space we can inspire social change and begin to transform our community and the world.

To learn more about the Busboys and Poets visit https://www.busboysandpoets.com/ or OCTFME’s locations referral resource BUSBOYS AND POETS.  For information about past locations of the month, visit DC Reel-Scout Directory.