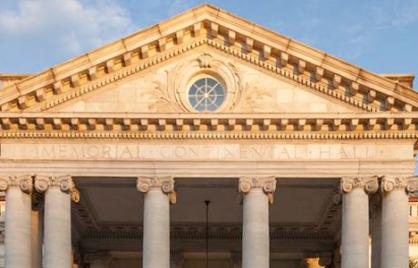 The DAR Headquarters Complex at 1776 D Street, NW in Ward 2, features a total of 450,000 square feet of space that occupies an entire city block within steps of the White House, Washington Monument, and the National Mall. The complex includes a museum, library, auditorium/grand hall, manuscript room, conference rooms, and general office space.

The Memorial Continental Hall (the DAR Headquarters), designed in 1905 by Library of Congress architect Edward Pearce Casey, is one of the finest examples of classical beaux-arts architecture in the country. The hall contains 31 period rooms that represent classic American federal architectural design. The interiors, each elegantly curated with exquisite crystal chandeliers, carpets, and fine antiquities, substitute for world-famous rooms in the White House, Supreme Court, Capitol building, Congressional offices, embassies, and other federal agency buildings.

“The [DAR Headquarters] is ideal for filmmakers and location scouts coming to the nation’s capital and we’ve hosted various sized productions, from local commercials to blockbuster films,” said Bren Landon, Public Relations Director for the DAR Headquarters Complex. “It’s one of the few spots in town that has interiors resembling stately iconic rooms that can double as the White House or an embassy. We’ve also got scenic exteriors and rooftop access to get great shots of Federal DC and The Mall. Even big-budget Hollywood films shoot from the roof because of the views.”

The DAR Constitution Hall, another of the buildings that make-up the DAR Complex, is a grand auditorium facility that accommodates a maximum capacity of 3,700 people.

“Constitution Hall is a ‘go-to venue’ for a myriad of productions -- from large scale comedy specials, to gala concerts, gameshows, and live television,” added Landon.

The DAR Headquarters Complex has also recently played host to many film and television productions, including: Parks and Recreation, Full Frontal with Samantha Bee, House of Cards, Veep, National Treasure, Salt, Jeopardy! , and Who Do You Think You Are? just to name a few.

“We have so many different spaces available for filming that it could be a one-stop-shop for film crews that want to capture a variety scenes by just going to one shooting location. The interiors are just so versatile,” added Landon.

The DAR Headquarters Complex offers an excellent opportunity for commercial photography or filming. If you are interested in learning more about the DAR Headquarters Complex as a filming location, please contact Susan Blankenship at [email protected]/(202) 879-3318. You can also find more information about the DAR Complex and its history on their website.

The “ Location of the Month ” initiative is part of the agency’s mission to market and support District locales as media production locations, and to bring attention to the wide range of cinematically compelling locations that are available to film and television productions.