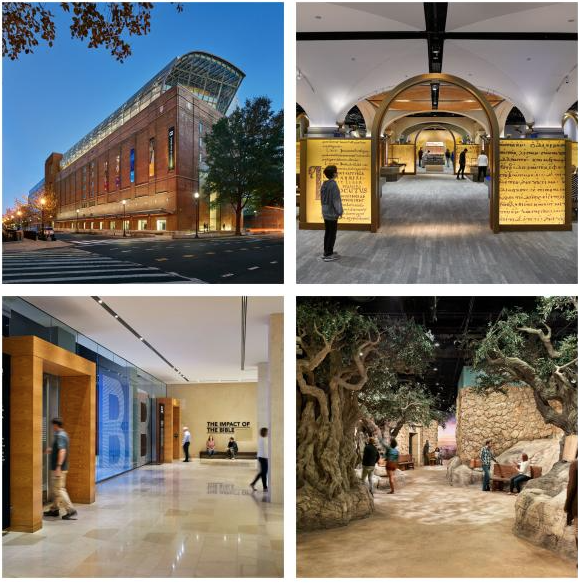 The Office of Cable Television, Film, Music and Entertainment (OCTFME) recognizes the Museum of the Bible as the April 2019 Location of the Month.

Opened in November 2017, the Museum of the Bible’s 430,000-square-foot building is located just three blocks from the U.S. Capitol in Washington, D.C.  From its massive 40-foot-tall bronze gates, containing the first lines from Genesis in Latin, that welcomes visitors; to the 140-foot-long Grand Hall Ceiling that runs the length of the hall and features illuminated images of manuscripts, nature, art and architecture; to the glass-enclosed promenade with its stunning views of DC and its monuments; the Museum of the Bible makes a desirable location for film and television productions, as well as shooting footage for various other visual mediums.

The Museum of the Bible aims to be among the most technologically advanced and engaging museums in the world, showcasing rare and fascinating artifacts spanning 3,500 years of history. The museum offers visitors a personalized experience with the Bible, and its ongoing impact on the world around us.

“The Museum of the Bible thanks the Office of Cable Television, Music, Film and Entertainment for honoring us as their April Location of the Month. Museum of the Bible welcomes filmmakers to consider our immersive and award-winning facility as a backdrop for their productions,” stated Museum of the Bible CEO, Ken McKenzie.  He continued, “We have a full-time broadcast and production manager available to assist in all aspects of filming at the museum and a small studio to provide a more controlled environment when necessary.”