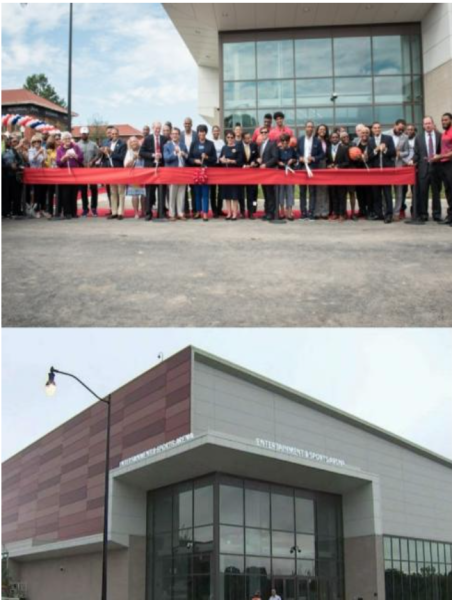 The Office of Cable Television, Film, Music and Entertainment (OCTFME) recognizes Entertainment and Sports Arena as the November 2018 Location of the Month.

A project deemed from the start, "Bigger than Basketball," the Entertainment and Sports Arena, is a 4,200-seat, 120,000-square-foot arena located in the Congress Heights neighborhood of Washington, DC that will serve as a practice facility for the NBA Washington Wizards and home court of the WBNA Washington Mystics. The venue will establish a premier entertainment destination within Ward 8 that will open doors to more diverse programming options in the District of Columbia. It will also attract cultural and community-based events, giving residents and visitors the opportunity to enjoy the rich diversity of DC in a brand-new space.

Located on the St. Elizabeths East Campus, the Entertainment and Sports Arena is projected to produce approximately $90 million in new tax revenue over 20 years and attract more than 380,000 annual visitors per year to the Congress Heights neighborhood.

“The new Entertainment and Sports Arena is a place where DC residents and visitors can witness a variety of diverse programming and celebrate the Ward 8 community,” said Gregory A. O’Dell, president and chief executive officer of Events DC. “From live entertainment and e-sports, to boxing and basketball, this venue will showcase the next global sensations, up and comers like the Capital City Go-Go’s and our Washington Mystics will be the first WNBA team to call the arena home.”

In collaboration with Smoot/Gilbane Sports, the project honors opportunities for local businesses and District residents to bring much-needed economic and civic benefits to the local community, with nearly half of the project's hires living in Wards 7 or 8. The project has also exceeded its initial Certified Business Enterprise (CBE) goal set forth with over 65% of the contracts awarded to CBEs and more than $10 million dollars worth of contracts have been awarded to Ward 7 and 8 businesses.

Events DC, along with its project teams, Brailsford & Dunlavey as the program management team, the architect/engineer joint venture of Washington Arena Design Group and Smoot/Gilbane Sports as the construction management team, have played a key role in the planning, design and construction of the new facility.

To learn more about the Arena and to view the upcoming calendar of events, www.ESAontheRise.com website or at OCTFME’s locations referral resource DC Reel-Scout.