Thursday, February 24, 2022
Newly renovated Franklin Park is one of the largest expanses of green space in downtown DC and a destination for residents and visitors alike. 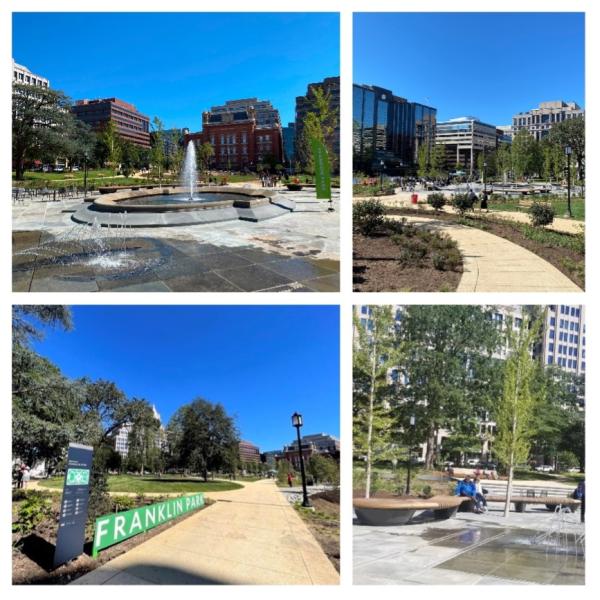 Washington, DC – The Office of Cable Television, Film, Music, and Entertainment (OCTFME) recognizes FRANKLIN PARK as the February 2022 Location of the Month.

As downtown Washington DC's most significant Green Space and a premier urban park, Franklin Park is a historical destination with a new face. Originally established in 1832, Franklin Park reopened in September 2021 after an eagerly anticipated renovation.

Located at 1132 “I” Street NW, the new Franklin Park includes an expanded and restored fountain plaza and an amazing new children’s garden. The upgrades to the park also include ADA-accessible sidewalks, enhanced lighting, conversational seating, a diversified tree canopy, active and engaging green space, and a future restaurant pavilion.

Mayor Muriel Bowser and the DC City Council provided the funds for the 189-year-old park’s renovations. The newly renovated Franklin Park reflects the history, culture, and grandeur of our nation’s capital and makes an excellent DC location for film, television, and commercial productions and will be able to accommodate engagements and corporate events in the future restaurant pavilion.

Operated and managed by the Downtown DC Business Improvement District (DowntownDC BID) in cooperation with DC Department of Parks and Recreations (DPR), Franklin Park is a DC destination for residents, workers, and visitors from around the world.

Since the 1850s, the National Parks Service (NPS) owned Franklin Park, has occupied nearly five acres in downtown DC. While a great location in continuous operation to the public, this grand park had fallen into disrepair for many years. Mayor Muriel Bowser stepped in to renovate the park through a joint partnership between Department of Parks and Recreations (DPR), (NPS), and the DowntownDC BID. DPR is excited to cooperatively manage this wonderfully renovated space," said a spokesperson for DPR and Franklin Park.

Franklin Park is now a meaningful and modernized destination park for residents and visitors for years to come. To learn more about Franklin Park, please visit downtowndc.org/franklinpark, and to inquire about its availability as a filming location please call Department of Parks and Recreation permitting office at 202-671-2597. For information about past locations of the month, visit DC Reel-Scout Directory.

The "Location of the Month" initiative is part of the agency's mission to market and support District locales as media production locations and to bring attention to the wide range of cinematically compelling locations that are available to film and television productions.