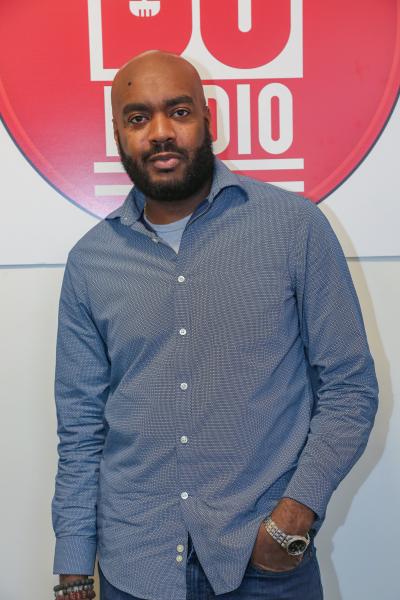 The District of Columbia Office of Cable Television, Film, Music, and Entertainment (OCTFME) is pleased to recognize Chad Eric Smith as the October 2019 Filmmaker of the Month.
Chad Eric Smith is a multi-disciplined artist born in Washington, DC. Raised in Ward 8's Bellevue neighborhood, Smith has always been a perpetually inspired and passionate storyteller. As a student at School Without Walls Senior High School in Foggy Bottom, Smith was a member of Children's National Medical Center's Teens Against The Spread of AIDS (TASA) theater troupe. He was further bitten by the acting bug at the University of Pittsburgh at Greensburg, where he performed in several stage plays. There, he earned his Bachelor of Science in Psychology.
Smith has over 15 years of experience as a professional actor.  He added filmmaker to his resume in 2014 when he co-wrote and starred in his film directorial debut, the hilarious short comedy Dark Therapy. “Irony is my favorite kind of tool and theme to use, whether I'm acting or writing,” states Smith. For his performance as a vampire with an irrational fear of blood who is prescribed mumbo sauce as a dietary supplement, Smith received the Gold Peer Award in the "Acting on Camera - Fiction Male" category from the Television, Internet & Video Association of DC (TIVA-DC). The film also had its Los Angeles premiere at the famous Grauman's Chinese Theatre on the historic Hollywood Walk of Fame. In 2015, he co-produced and composed the original score for the silent short film See The Boy, inspired by the shooting of Tamir Rice.
In 2017, Smith wrote, produced, and directed the short sci-fi drama Rumination with his production company “MisterDuke” Productions, LLC. The film follows Elliott (Kelvin Drama), a heartbroken man who travels into the past for a second chance at a failed relationship. He meets Renard (Danny Gavigan), a quirky neuroscientist who offers to alleviate his distress with a new scientific method: a top-secret drug that enables time travel. The film also stars former MISS DC USA, L. Angus Whinfield. Production occurred in the summer of 2017, key scenes were shot at Washington, DC area landmarks, such as the National Harbor, the H Street Corridor, and the DC Diner. Rumination became an official selection at over 30 film festivals, including the Martha's Vineyard African American Film Festival, the Boston SciFi Film Fest, the DC Black Film Festival, and the Indie Night Film Festival. It also won over 20 awards, including “Best DMV Film” at the Rosebud Film Festival, “Best Local Film” at the Capitol Hill Film Classic, and a Gold Peer Award in the “Directing – Fiction” category from TIVA-DC.
In 2018, Smith directed three episodes of the upcoming comedy series, "UpRoaR," which was filmed at the Uproar Lounge & Restaurant in the Shaw neighborhood. In 2019, Smith co-produced and starred in the short sci-fi drama Fatherless, which will hit the national film festival circuit in 2020.
“It's such an honor to be named the October Filmmaker of the Month. As a DC native, this is very gratifying. Thank you to the DC Office of Cable Television, Film, Music and Entertainment. This is amazing,” said Smith.
Additionally, Smith is a consultant for the national non-profit Men Can Stop Rape, where he writes, directs, and edits public service announcements, promotional videos, and documentaries intended for the organization’s social media content and/or for third party stakeholders. Smith is also a founding member of the Diverse Writers & Artists of Speculative Fiction, a writers support group.
“To up and coming writers, I would say to just write. When you have a thought of something, write it down. You never know how that will be helpful in the future. When I write something, I'll put it down and come back to it two months or even a year later. And then it feels like I'm collaborating with my past self because the words just kind of sit there and marinate,” said Smith. He continued, “And as an actor, I was looking at an interview with Jonah Hill. He said actors are seen, but writers are heard. While it was fun to play the vampire in Dark Therapy, it was very cathartic as a writer, to have other actors portray some of the things that were on my mind with Rumination.”
Chad's Social Media:
Facebook: https://www.facebook.com/ActorChadEricSmith/
Instagram: @IamChadEricSmith
Twitter: @ChadEricSmith
Chad's Website:
www.MisterDukeproductions.com
###
CHAD ERIC SMITH DC RADIO INTERVIEW
Want to learn more about Chad Eric Smith and his work? Click HERE to listen to his DC Radio interview.