Monday, May 7, 2018
Veteran Daytime-Emmy award-winning producer, writer, director, and cinematographer recognized for his contributions to the local filmmaking community 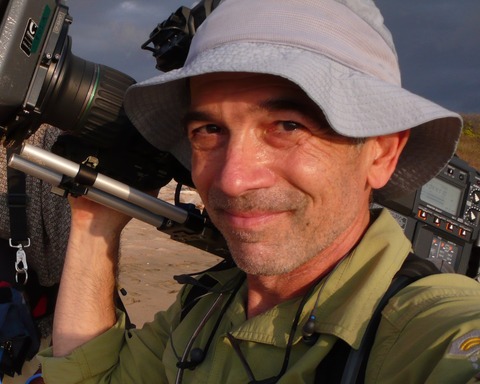 The District of Columbia Office of Cable Television, Film, Music, and Entertainment (OCTFME) is pleased to recognize Larry Engel as the May 2018 Filmmaker of the Month.

Engel has more than 40 years of filmmaking and teaching in all 7 continents. His passion is reflected in his body of work, which encompasses adventure, conservation, the environment, wildlife and more generally, the sciences. His documentary work has appeared on PBS, the Discovery Channel, National Geographic Television, TBS, the History Channel, and BBC. In 1988, he won a Daytime Emmy for Cinematography for a PBS science television show for children, 3-2-1 Contact!  Engel has also received the Mountain Spirit Award from the Mountainfilm Festival.

“I’ve always been drawn to life on the edge and experiencing our world. Whether it’s tornado-chasing, flying into hurricanes, or getting lost in jungles, I love Mother Earth,” said Engel. “After traveling the globe for years, I’ve met penguins, coyotes, and a lot of mummies. Documenting these life experiences, meeting our global family members in their habitats, is what excites me as a filmmaker.”

In 2010, Engel directed the film, Potato Heads: Keepers of the Crop, which premiered at the 19th Annual D.C.-based D.C. Environmental Film Festival and later screened worldwide.  That same year, Engle won the AAAS Kavil Science Journalism Award for In-Depth Reporting, his career second, for The Human Spark.  Other work includes directing a 2009 PBS television series, The Human Spark, which follows actor Alan Alda as he meets researchers of human evolution and behavior around the world.  Prior, in 2007, he was a producer, director of photography, and co-editor of Apology, an indie-feature that addresses politics on college campuses.

Engel’s current creative project, House Calls: Ernest Medicine, is a partnership with native Washingtonian Dr. Ernest Brown, founder of the DC-based Doctors to You. The project is a web series that will explore the health and wellness industry’s best practices and tell the stories of how marginalized communities struggle to get the healthcare they deserve. The series will film mostly in the District of Columbia.

Engel joined the faculty of American University in 2005, and currently is an associate professor at the School of Communication, associate director of the Center for Environmental Filmmaking at the D.C.-based university, and a “filmmaker-in-residence” at the AU’s Investigative Reporting Workshop. Engel’s teaching focuses on film theory, film production, and emerging media technologies. His favorite classes include Classroom-in-the-Wild: Extreme HD Alaska, and The Practice of Environmentalism that has taken students to the Galapagos Islands and Cuba.

“There is no better way to help the Earth and its inhabitants than telling stories through film,” added Engel.

Larry Engel - May 2018 Filmmaker of The Month