Thursday, June 7, 2018
Local filmmakers celebrate the DC Premiere of their new documentary feature “The Liberation” at AFI DOCS this month. 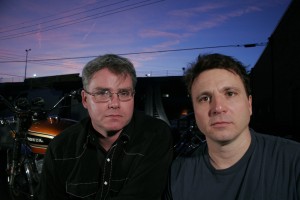 The District of Columbia Office of Cable Television, Film, Music, and Entertainment (OCTFME) is pleased to recognize Trixie Film co-founders Christoph Green and Brendan Canty as the June 2018 Filmmakers of the Month.

Christoph Green graduated from the Maryland Institute College of Art with a BFA in Painting and began working as a designer specializing in broadcast design.  He started an independent design company, Tangerine Studios, an award-winning shop, which over the years boasted clients such as The National Gallery of Art, The Discovery Channel, The Glover Park Group, PBS, PBS Kids, The Virginia Department of Health, AOL Devices, The Obama-Biden Campaign, and TLC.  Brendan Canty is most well known as the drummer for the legendary DC-based band puck rock band, Fugazi. In addition to his longtime association with Fugazi, Canty also worked with several other bands during his celebrated career as a musician, including Rites of Spring, Deadline, One Last Wish, Happy Go Licky, Bob Mould, and Deathfix. Canty currently if a member of the band Super! Silver! Haze!, and the instrumental trio, The Messthetics. In addition to his work as a musician, Canty has also and produced records for Ted Leo, The Thermals, the Make Up, and others. Canty has composed music for dozens of hours of television and film and has performed the live score to films with the great filmmakers Sam Green and Brent Green. Canty most recently composed the score for Frank Serpico, directed by Antonino D’Ambrosio. Canty is currently working on the score for DC Noir, an independent feature film produced and co-directed by local novelist, television producer, and screenwriter, George Pelecanos (The Wire, Treme, The Duece).

After establishing themselves as respected local filmmakers and working on solo projects for many years, Green and Canty formed Trixie Films in 2004 out of their shared passion for film and to document music. The first major project of their collaboration was the music documentary series, Burn to Shine.

“We created the company, Trixie Films out of our love of music documentaries to produce the series, Burn to Shine,” said Canty.

“Filming dozens of bands in the Burn to Shine series created multiple relationships for us and we were invited to create films and videos for a series of amazing musicians including Eddie Vedder, Death Cab For Cutie, Bob Mould, Pearl Jam, Dave Douglas, The Decemberists, and Wilco. Lots and lots of Wilco” added Christoph.

Green’s and Canty’s most recent film is a documentary feature titled, “The Liberation,” about local non-profit DC Central Kitchen. The film, which has its DC-area premiere at the AFI DOCS Film Festival on June 15 tells the honest, raw, unflinching the story of a group of formerly incarcerated men and women as they enter and try to complete a unique and innovative 14- week culinary training program that offers them the chance to learn the vocational and life management skills required to turn their lives around.

“In 2014, Brendan and I embarked on the task of making a film about the culinary training class at DC Central Kitchen,” said Christoph. “This was my first feature-length narrative documentary and was a true labor of love.”

The two Filmmakers embedded themselves in this class of individuals who had faced high barriers to unemployment, all going through the DC Central Kitchen Culinary Job Training program. The group of students faced histories of incarceration, addiction, homelessness, and trauma and received the hands-on training and support they need to begin a culinary career. What emerges is an emotionally complex narrative of three students and their dramatic stories, punctuated by high octane cooking.

Christoph Green is currently in pre-production on two full-length film projects which he hopes will have scope and impact similar to the Liberation and Brendan Canty is currently working on the feature DC Noir, by George Pelecanos.

For more information how to get tickets to see The Liberation, check out the AFI DOCS ticket information site, here.

Do you know a DC-based filmmaker that would make a great future Filmmaker of the Month? If so, OCTFME would love to hear about them. Send us your recommendations using this nomination form.