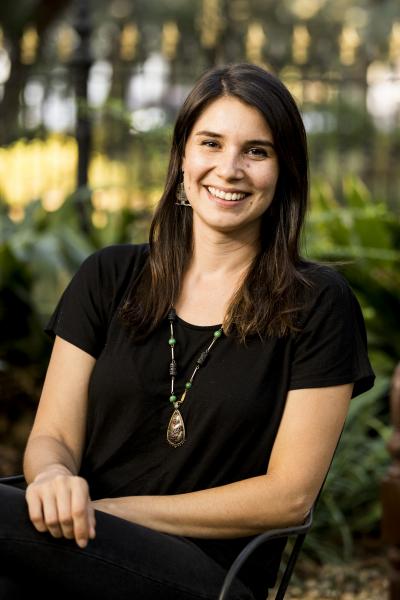 The District of Columbia Office of Cable Television, Film, Music, and Entertainment (OCTFME) is pleased to recognize local filmmaker Gabriella Garcia-Pardo as the February 2018 Filmmaker of the Month. She is a resident of Ward 5.

Gabriella Garcia-Pardo is a District-based freelance documentary filmmaker and visual journalist whose work concentrates on social issues, innovation, artists, and especially women’s voices. Garcia-Pardo’s latest work, Gunpowder Women, is a short-form documentary that showcases the extraordinary talents of an all-female mounted horseback team in Morocco, led by young mother Amal Ahamri. The film explores the evolving role of women set in the context of a male-dominated sport. Gunpowder Women is in mid-production.

“I’m passionate about using film to help women amplify their voices. Our goal with [Gunpowder Women] is to show the intimacy and nuanced picture of being a female athlete and how women are fighting to change their roles in society across the world,” said Garcia-Pardo.

Garcia-Pardo also founded the D.C. Chapter of Video Consortium, a monthly collective of leading documentary filmmakers and video journalists from across the country discussing topics of relevance. The Consortium, second largest in the country, honors Black History Month in February and chronicles LGBTQ stories in March.

“With the Consortium, I wanted to help build the creative community here in D.C. and inspire filmmakers and journalists to continue telling important stories and connect with one another,” added Garcia-Pardo. “We’re still growing and looking to develop a mentorship component, one community giving back to another community.”

Garcia-Pardo’s work has been widely recognized: most recently, she was recognized as a 2017 Filmmakers Without Borders Grantee and a 2017 International Women’s Media Foundation (IWMF) Grantee. Prior, she was the recipient of the 2016 White House Photographers Association, Second Place Story for These Bats Mysteriously Survived a Killer Fungus; a 2015 Webby Award, People’s Choice for Best Individual Documentary for Soldier Adopts Dog That Saved His Life; as well as 2014 Webby Award nomination for Best Editing, showcasing musician Gregory Porter in A Lion in the Subway.

Garcia-Pardo’s love for adventure and the mountains is an easy fit for work at National Geographic, where she produces, shoots, and edits short-form documentaries for digital channels. At National Geographic, she co-directed Gobi Grizzly (2015). Prior, she taught filmmaking to high school students as well as worked on National Public Radio’s (NPR) Music Team.

“One of the things I love about D.C., and why I’d chose D.C. over New York or Los Angeles, is the warmth of the city. People go out of their way to help one another and that is one of the pretty special things. People are honestly passionate and are trying to utilize their skills to impact the world,” concluded Garcia-Pardo. If you are interested in learning more about Gabriella Garcia-Pardo and her work, go to her professional website at www.gabriellagarciapardo.com.

***Do you know a filmmaker you would like to see featured as OCTFME's Filmmaker of the Month? If so, please send your recommendations to this nomination form.

The District of Columbia Office of Cable Television, Film, Music, and Entertainment is responsible for implementing, managing, and administering programs, initiatives, and services that support media industry economic activity, growth, and employment in the District of Columbia. Washington, D.C.'s instantly recognizable landmarks, diverse neighborhoods, cultural amenities, and first-class accommodations are just some of the many features that make the nation's capital a venue of choice for media production. For more information, contact the Office of Cable Television, Film, Music, and Entertainment at (202) 671-0066, visit us on the web at http://entertainment.dc.gov, join the DC Film community on Facebook, and follow us on Twitter, and Instagram.