Friday, August 3, 2018
Bold and motivated, this young filmmaker is unafraid to tackle true stories that challenge viewers both stylistically and spiritually 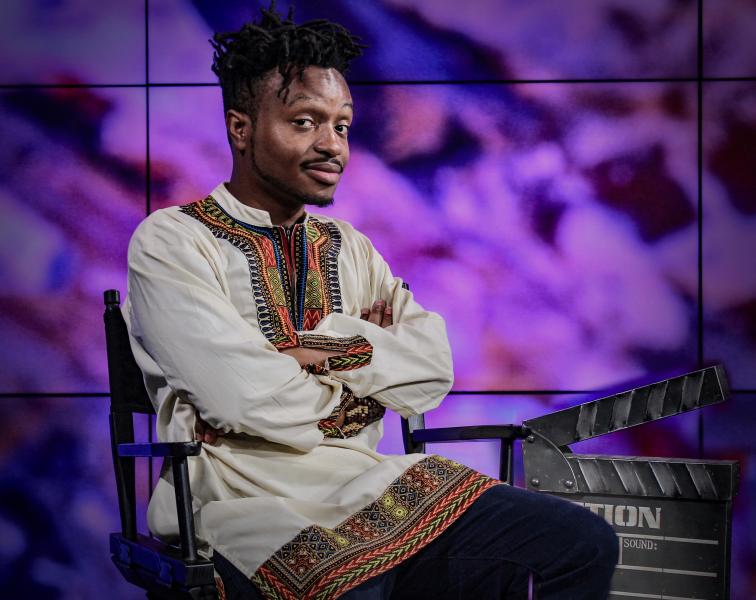 The District of Columbia Office of Cable Television, Film, Music, and Entertainment (OCTFME) is pleased to recognize Ajani Amiri Thomas as the August 2018 Filmmaker of the Month.

Ajani Amiri Thomas is just getting started. A filmmaker, screenwriter and student at Howard University, Ajani’s first short film Crispus recently won the Equal Justice Society’s Annual Gala honor and earned a premiere at the Kennedy Center as part of the Safe Streets Foundation’s Prison Art Show. The exciting debut, under his production company The Amiri Project, is the result of an artist who has been challenging himself to push the boundaries of the film art form and to find stories that motivate him spiritually. Of his success, Ajani credits Dennis Sullivan of Safe Streets and I’shanee Ford, “It really is just the opportunities I’ve been given through the different people in my life that have believed in me and kept pushing me.”

Ajani’s first serious undertaking is a short film inspired by Kalief Browder, a young man who was charged with allegedly stealing a backpack and eventually committed suicide after years in solitary confinement. Browder’s mother passed away shortly after. Ajani’s film Crispus chronicles the story of a man in solitary confinement trying to remember the sound of his mother’s voice.

To bring this haunting story to life, Ajani looked at locations in the DMV area, ultimately filming at the D.C. Correctional Facility at Lorton, Virginia. Closed in 2001, Lorton has been converted into an artist’s space, part of the Workhouse Arts Center. A screening of Crispus is also scheduled at the former prison following its Kennedy Center debut.

Ajani was born in Northwest, DC and raised on the sounds of Go-Go in the streets. Growing up and now attending college in the District, Ajani sees the city as one rich in art and culture, a landscape of entertainers and performers. Becoming a member of that community and building a supportive network are never far from his mind. At Howard, Ajani is a founding member of the Sesh Art Collective, a group of artists who meet regularly at an art space on U Street where they have the chance to collaborate and support each other. “It takes a lot of people to your dreams come true,” says Ajani, “listen to people and be open to people and it works.” These words aren’t platitudes, Ajani runs a writers workshop every Tuesday and Thursday for aspiring screenwriters.

While Ajani got his start as a filmmaker out in LA at the New York Film Academy. On the backlots of Universal Studio, Ajani was trained in the entire filmmaking process, everything from writing to casting to directing to editing. Though Ajani’s career in film is still just beginning, he has a clear vision of where he wants to go: “I don't have a lot of experience. I just want to tell stories, and stay true to the realities of the people who inspire them.  I see film as a surreal art.  If the work isn't bold then it hasn't gone far enough.”

Ajani hopes to follow up his short film with a feature film currently titled Kings of Babylon. The film, which will also take inspiration from a true story, is about three Black Panthers who have a shootout with the KKK. Kings of Babylon is set to be produced by the Los Angeles based production company, Required Reading, whose leadership includes credits like The Lego Movie and The Butler.

For aspiring filmmakers looking to follow his lead, Ajani recommends they build their networks. Find “your group of collaborators that you know really care about you and that you really care about...eventually, you’ll get there.”

Don’t miss the premiere of Crispus at the Kennedy Center on September 1st!