Tuesday, January 11, 2022
This innovative storyteller and media expert specializes in cutting-edge visual and media technologies such as virtual and augmented reality. 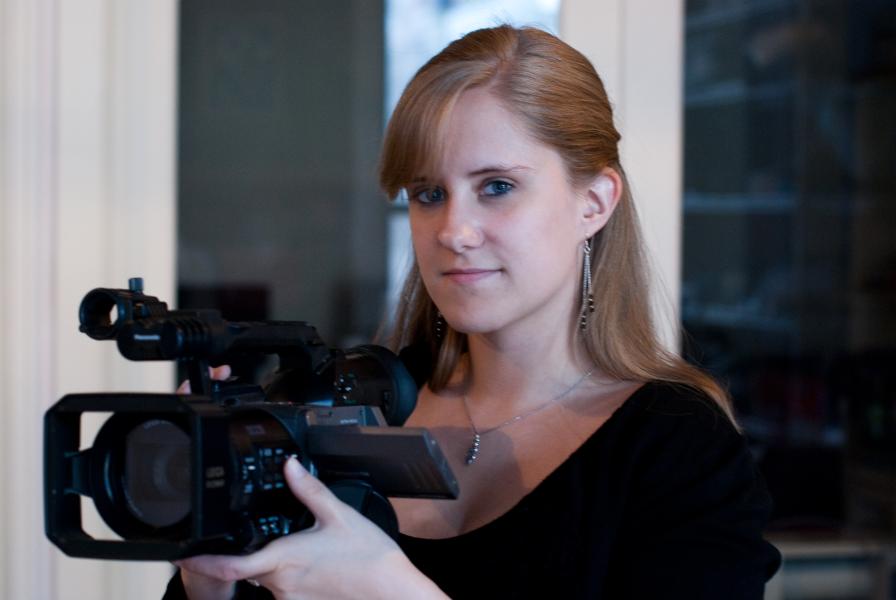 Washington, DC – The District of Columbia Office of Cable Television, Film, Music, and Entertainment (OCTFME) is pleased to recognize Emma Mankey Hidem as the January 2022, Filmmaker of the Month.

“It is an honor to be recognized as OCTFME's Filmmaker of the Month. When I started my career, Virtual Reality didn't even exist. So, I never imagined I'd end up where I am. But through the vibrant media landscape of DC, I have found my true calling, using technology to tell stories and make the world a better place,” said Emma Mankey Hidem.

Emma graduated from NYU's Tisch School of the Arts, Film & Television program. She began her documentary career under the tutelage of such high-caliber filmmakers as Academy Award-winner Ross Kauffman (Born Into Brothels) and Emmy-nominated Joe Fab (Paper Clips).

“I have always been a storyteller at heart, but writing never quite clicked for me. When I took a video production class in 9th grade, I realized media was the storytelling medium for me. It just felt natural. From that moment on, I devoted myself to pursuing a career in media. I relocated to DC in 2010, and it was here that I learned how to create interactive media and 360 Virtual Reality. I fell in love with the challenge of creating a whole world and making it interesting in multiple places around the 360 sphere (as opposed to traditional video/film where you're framing shots and controlling what the audience sees). I knew immediately that this technology had promise because of the immersive nature of 360/VR and how I could use it to give people experiences they couldn't have in real life. Even though there were no VR headsets on the market yet, I am so glad that I pursued this path,” said Emma.

She began with immersive and interactive media and immediately saw the promise these new technologies held for storytelling, particularly social impact storytelling. Emma founded Sunnyside VR in 2015 when virtual reality was new on the horizon. She has created unique experiential media for brands such as Mercedes, Estee Lauder, Norwegian Cruise Lines, AARP, and the ACLU.

Emma remains committed to pushing the limits of interactivity in media. She has spoken about immersive media all over the country, most notably at festivals such as AFI Docs and SXSW. She was recently featured in Authority Magazine as a Woman Leading VR/AR/XR. She has served as a visiting scholar at American University's Institute for Immersive Designs, Experiences, Applications, and Stories and currently serves on the board of Women in Film & Video and DCXR.

When the COVID-19 pandemic hit and production came to a halt, Emma created The Game Show of Love: an interactive dating game show that took place over Zoom and included audience participation. The show was a local hit and has had two seasons during the pandemic. She plans to reconfigure the show post-COVID to do Season 3 as a live, in-person event in 2022.

Film Credits:
The Game Show of Love (2020)
A LIVE dating game show taking place over Zoom where six singles get to know each other through a series of unconventional games and hopefully "meet their match."
Blue Ridge Barnum (2011)
Enter into the wacky world of Mark Cline, a sculptor, and entertainer from Rockbridge County, VA. The film follows Mark all over the state of Virginia and even to other parts of the country during a pivotal year in his career as he accomplishes major career milestones like his first museum exhibition and a starring role in his first stage play.
Social Media Handles:
TW: @sunnysidevr
FB: facebook.com/sunnysidevr
IG: @sunnysidevr
Relevant Websites:
www.sunnysidevr.com
www.sunnysideproductions.com
www.gameshowoflove.com

Want to learn more about Emma Mankey Hidem and her work? Click HERE to listen to her DC Radio interview.

OCTFME provides additional support to the Creative community through the Creative Affairs Office (CAO). CAO showcases and preserves the District of Columbia's rich creative communities throughout all 8 Wards. CAO builds sustainability in the creative community through policy, programming, and education, further expanding the middle-class pathway for the creative workforce. CAO coordinates public, private, and community partners to accomplish all goals and create equitable and inclusive opportunities for the District's creatives.