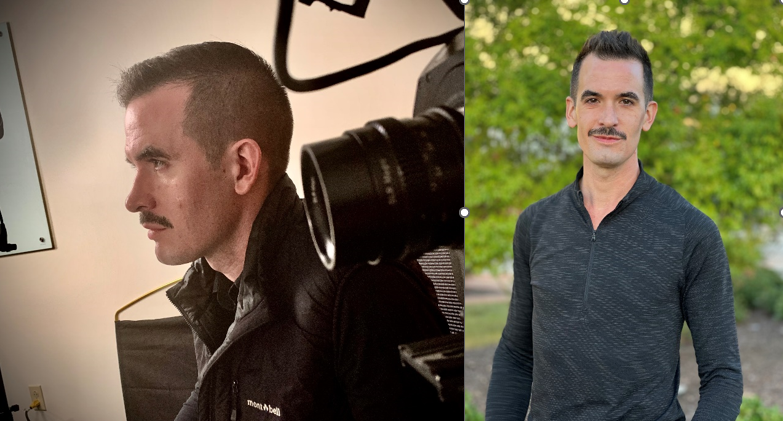 Washington, DC – The District of Columbia Office of Cable Television, Film, Music, and Entertainment (OCTFME) is pleased to recognize DYLAN GRAVES BARBETA-COMSTOCK as the December 2022 Filmmaker of the Month.

District-based filmmaker Dylan Graves Barbeta-Comstock is the creative director of Holaday Graves Media, a multimedia production company he founded that specializes in documentary and issue-based video production for educators, government entities, non-profits, and social justice organizations. Dylan’s creative and professional work during his celebrated career has been informed by his understanding of otherness since age 3. As a queer kid growing up in rural Virginia, Dylan started making experimental art videos in a barn at age 13.

At age 14, Dylan’s cross-country coach died of a heart attack in front of him at practice. In order to make sense of what had happened and what it meant to him, Dylan scripted, cast, directed, and edited a video about the experience, By The Blood of My Knees. He realized then that he could do something with video that mattered. That same year, Dylan worked on his first socially-conscious documentary film as a production assistant for Amy Gerber-Stroh’s film Public Memory: A Film About American Memorials.

Surviving a variety of crimes as a child, and later as an adult, further galvanized his drive to create meaningful media. He chose to leverage art, lived experience, and education in service of inspiring change.

“It is an honor to be trusted with others’ stories. It is a privilege that my journey and work may be in service of others’ truth. Thank you for this opportunity.”

After interning with Clive Barker, MTV Films, and the Los Angeles Film Festival Dylan graduated with high distinction from the University of Virginia, having completed a narrative review of literature titled “Nonheterosexuality, Age, Gender, and Childhood Sexual Abuse,” which examines the predictors, correlates, and sequelae of sexual abuse experienced by gay male youths. Following graduation, Dylan moved into Washington, DC and soon thereafter began working with local LGBTQ+ publications, documenting queer activism from 2010 to 2018 through video and photography.

In 2015, Dylan began working with Video/Action, a DC-based, non-profit production company specializing in the elevation of infrequently heard voices. During his time with Video/Action, Dylan worked with the USDOJ’s Office for Victims of Crime, producing over 50 videos featuring survivors, their stories, and those who serve them. To ensure best practice in transforming his own experience with tragedy into advocacy for others, in 2017, Dylan became a nationally credentialed victim advocate through the National Organization for Victim Assistance. In 2018, in partnership with the National Education Association, American Federation of Teachers, The Advancement Project, and the Schott Foundation for Public Education, Dylan produced and wrote a nine-video series examining the School-to-Prison Pipeline from impacted stakeholder perspectives.

In 2019, Dylan founded Holaday Graves Media.  Established in the District of Columbia, Holaday Graves Media specializes in trauma-informed video, and media solutions to complex topics, working with clients ranging from Penn State’s Sexual Assault Forensic Examination Telehealth Center and Network for Victim Recovery of DC to the American Association of Veterinary Medical Colleges and Boehringer-Ingelheim. Following his work with the EPA-DOJ Victim Assistance Team in 2021, Dylan was invited back to present collected knowledge and lessons learned as a survivor-turned-video advocate for National Crime Victims’ Rights Week 2022.

Currently, Dylan is developing video toolkit and curricula concepts for mental health professionals, victim advocates, and LGBTQ+ affiliated service providers. Dylan is also working on a 27-panel visual art series titled “Disruptive Nocturnal Behaviors.”  A reflection of surviving sexual violence, the series combines photography, textual art/poetry, and collage in presentation of PTSD sequelae. Within the series, the term disruptive nocturnal behaviors is folded in on itself by illustrating how the name of the symptom can also describe the cause of the harm. This is the forerunner to a film he is writing titled "The Pressing Bed," a metaphor for the compression of unchosen identity layers within a survivor.

Dylan has been a member of Women In Film & Video (WIFV) for the past six years. He has been a member of the Board of Directors since 2018, serving as Secretary (2020) and Treasurer (2021) for the organization. In 2020, Dylan re-established the WIFV Mentorship Program which he currently chairs. For the program, he authored a 12-month curriculum paralleling the seasons, and growth cycles within a creative’s career. Recognizing the impact of mentorship in his life, he was driven to give back.

In addition to being an artist and public speaker, Dylan loves running, motorcycle-camping, plants, his husband, and their cat Bill.

Want to learn more about Dylan Graves Barbeta-Comstock and his work? Click HERE to listen to his DC Radio interview.