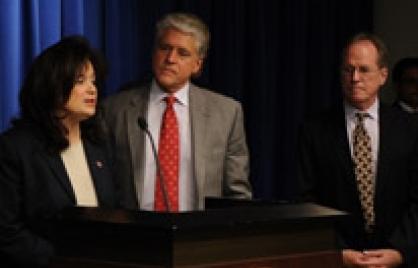 DC Office of Motion Picture and Television Development and SnagFilms Partner to Find the Best Independent Films in the Nation’s Capital. City partnership will crown and distribute the best films from “the Documentary Capital of the Universe.”

Mayor Vincent C. Gray and SnagFilms Founder Ted Leonsis called today for District filmmakers to submit their best documentary or narrative film to the inaugural “Washington’s Best Film” competition. A panel of judges will select two grand prize winners -- one documentary and one narrative film -- to be distributed via SnagFilms’ global online streaming networks. The winners will also be considered for SnagFilms’ transactional video-on-demand channels.

“Having met many of our local filmmakers and seen some of their incredible films, there is little question that our city is the ‘Documentary Capital of the Universe, said Mayor Gray. “Increasingly, the District of Columbia isn’t just a backdrop for a story – it’s the home of the storyteller. The talent that thrives in our city deserves to be shared on the largest stage possible, and our partnership with SnagFilms provides an exciting new venue to showcase their work.”

The competition was created out of a partnership between the city’s Office of Motion Picture and Television Development and Washington, DC-based SnagFilms in order to help elevate the national and international profile of the city’s most talented filmmakers.

“SnagFilms is honored to have the opportunity to work with Mayor Gray and the DC Office of Motion Picture and Television Development to recognize the gifted filmmakers in our community,” said SnagFilms Founder and Chairman Ted Leonsis. “I’m proud to have produced three films in this city, and have met and worked with many of our area’s filmmakers through SnagFilms. We look forward to combining the worldwide reach of the Web with SnagFilms’ tools to bring our region’s best storytelling to the broadest global audience.”

Additional information about the competition (including rules) will be announced later this month via the Office of Motion Picture and Television Development, SnagFilms.com and IndieWIRE.com.